SPICES is a group of friends that once a month go out for a meal at an Indian or Chinese restaurant.

Sampling food from many of the areas best restaurants, the idea of the night is for lots of male bonding, laughing & storytelling. Tonight was the first night I had managed to join up with the group.

After coming out of the hospital last week & being stuck in the hospital or my apartment for the best part of a month I was looking forward to going out for a meal & to meet lots of new people. My friend Pat had arranged for me to be picked up by Andrew & himself & I was chauffeured to tonight's restaurant for the September 2018 SPICES night out.

I had never been to tonight's restaurant 'The Indian Hut' in Torre de la Horadada, before & was looking forward to it. On arrival, I was struck by the restaurant chains logo which is an obvious reworking of the 'Pizza Hut' sign. Which came first I don't know, but it is a question which food lovers all over the world often ask 'Which Came first, the Pizza or the Curry'.

The restaurant had a few tables of people already seated when we arrived & the restaurant soon filled up as around 17 members of the group arrived for the meal. The majority of the group ate off of the cheaper menu of the day and the food was really good. We started with the obligatory popadums with a selection of sauces to go with them.

Having just come out of hospital & having to be careful what I eat & drink for a while I went mild for everything. For my starter, I had the chicken pakora which was very good & after being a little worried about what it was beforehand, it was very tasty & I enjoyed it. Think Indian style chicken strips with a bit of salad and you've got it.

For my main meal, I ordered a normal chicken korma with pilau rice, after hospital food & plain food at home I felt my stomach would thank me for this. The rest of the party went for a wide range of curries all of which smelt fantastic as they were brought to the table & although my stomach was thanking me for my sensible choices my nostrils & other senses were yelling out to try some of the more aromatic flavours & smells that passed by every time a new dish was brought to the table. I did try a sample of one of the slightly spicier versions & have to say that it was very good.

I had pilau rice which I like but soon all sorts of different kinds of rice were being passed around, all very nice smelling & very tasty. The group ordered a variety of naan bread for the table which was passed around & as I had never tried most of them before I did try them all & they were delicious.

I am not sure what the name of my favourite naan bread was but it was like having a naan with jam & coconut. Trust me it tasted a lot better than it sounds & I loved it.

After our meal, whilst the banter was still going strong, our hosts brought us all an Indian desert or ice cream, even the vanilla ice cream, which I normally find bland, was very nice & the guys that tried the Indian desert said it was fantastic but couldn't say what it tasted like. I will have to try it when I next go there. The meal was finished off nicely by a round of brandy or tia maria.

My security team finally whisked me off home after a needed & enjoyable night out. Thanks, looking forward to the next event. 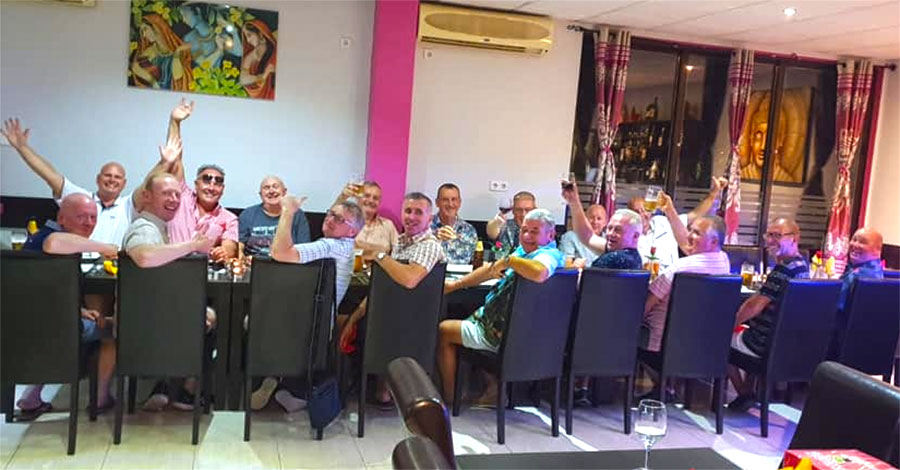