Due to the Coronavirus restrictions & the cold, I decided to stay at home in the warm this New Years Eve & I saw in 2021 with James Bond, unfortunately, M didn't make it too far into the New Year before she passed away. In true Hollywood style, all be it in Scotland in the snow, in a dingy family chapel, she died in James' arms.

It was shortly after this that I retired to my nice warm bed. Having been at home, alone, for Christmas Eve & New Years Eve, for the first time I can remember I can only hope the following year gets better than the last one quickly.

Friday, January 1st. I woke up fairly early & as part of my promise to myself to step up my efforts to lose weight, I start the new year with a blueberry, raspberry & banana protein shake. I do like the flavour of these so it is no hardship.

I have bought some new bathroom scales that connect to an app on my phone, I can now weigh & measure my body in a lot more detail. It can tell me my BMI, the amount of fat & types of fat & water in my body as well as the muscle & bone mass. It also rather worryingly tells me my bodies apparent age.

It has lots of information in it about my body makeup but the figures I am concentrating on for the first big weigh-in are, 17 stone 12lb, a BMI of 29 & a BMR of 2276 Kcal. Just for the nosey people that will want to know, it says that my body age is 56, which isn't as bad as I thought as I will be 54 in 3 weeks time.

Straight after my breakfast, I settle down to work on my family tree. My subscription to Ancestry.co.uk is coming to an end next week & I will not be renewing it for a while, it is just too expensive. I have started to use some genealogy software on my laptop called Legacy & it appears to have everything that I need to be able to do my research, but as it is so new to me, it will take some time to learn how to use it properly. I spend the rest of the day looking at the data on my family tree & correcting place names or removing duplicated places from the database.

This evening I watch football on the television and wrap up warm under a blanket with a pot of chai tea.

Saturday, January 2nd. I woke up around 8 am & jumped straight into my massage chair to get the aches & pains out of my back. I had a pot of cinnamon chai tea before shaving my head, showering & getting ready to face a new day.

As normal when I get out of the hot shower I have trouble breathing & I have to sit down for ten minutes. After a pot of sweet cinnamon tea,  I walk to the small Spanish Dicost supermarket by the church near where I live. I get a few groceries to make a chicken soup within the next few days, then walk home along the beach promenade.

After more hours working on the family tree, I steamed some broccoli & made some cheese sauce to go with a chicken burger. The cheese sauce wasn't brilliant but it was OK for a first attempt.

The evening was spent watching the mighty Arsenal hammer West Bromwich Albion 4 - 0, what a good end to the day.

Sunday, January 3rd. Today I spent the day, once again, working on my family tree. It will take me a long time to sort through all of the records in the Legacy software that I use. I am combining all of the locations in the database that are the same, adding addresses to the correct records & checking that places have been added correctly. I think this is going to take weeks if not months but there isn't much else to do in isolation so it's a good time to catch up.

Today's low carb, high protein meal was a large beef burger without the bun, with melted cheddar, mushrooms & a fried egg on top,

As it is my sisters birthday I ring her this evening to wish her a happy birthday & to catch up on any news. Like me, she hasn't got a lot of news as she doesn't get out much either. We are both looking forward to being able to get out more once COVID19 allows us.

Monday, January 4th. I got up, showered & got on the bathroom scales to see how my diet is going. I couldn't believe it when a message popped up saying I had lost a lot of weight & was I the same person it was weighing whose data it was using. I sat down with a pot of turmeric tea before I go out this morning to do some shopping, donuts will stay off the shopping list as the diet seems to be working.

My first visit this morning will be to Consum as they do a very nice bottle of Don Simon lemonade for only 75 cents, it is the only place I have seen it. After getting the lemonade & stowing it in the back of the Sharky mobile I will cross the road to go to Aldi to get lots of different types of meat for my keto diet.

After my mushroom cheeseburger for lunch I settle down to watch Robson Green on the television, he whines like an old woman every time he loses a fish, it's very funny.

For ages now I have had no jeans so I finally order some new ones from George at Asda, along with some new pyjamas & a dressing gown. At the same time, I order some oils & a diffuser & an electronic version of a hand warmer from Amazon. Now I just have to sit back & see what arrives first & how long I have to wait for all today's shopping.

Tuesday, January 5th. I had a pot of tea first thing today before doing some more food shopping as I think the shops may be shut for a Spanish holiday tomorrow. I only needed a few things, as usual, it was the things I forgot yesterday.

I saw my English neighbour Russ this afternoon. He went away at the start of December for a week & finally got back from his week in the Dominican Republic late last night. His outward trip was a nightmare & lasted over 55 hours. He extended his stay for a week after the first week but his return trip then took him 9 days due to COVID restrictions, loss of luggage & delayed flights. Los Alcazares may have been quiet, but after listening to his story over a Gin & Tonic at a local bar today, I am glad I stayed here & haven't attempted to fly out anywhere for the holiday season. 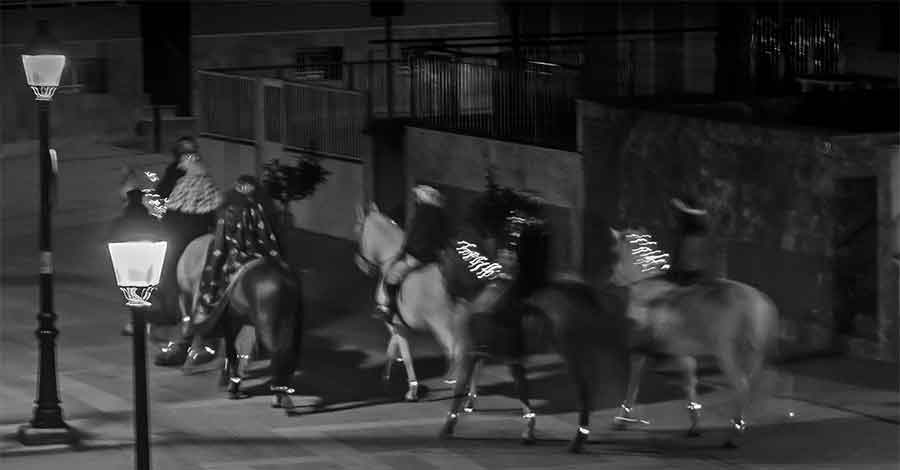 This evening the very limited, Three Kings Parade, came past my apartment. I am not sure of the accuracy of all of it though. I remember the biblical stories of the Three Kings bearing gifts, I don't remember the story of the Three Kings, the two guys following along on their horses just along for the ride, a motorbike outrider, three following police cars all with flashing lights following a car blaring music out at very high volume, all accompanying the three Kings on their visit to see baby Jesus. It's no wonder there was no room at the Inn with all that entourage.

UPDATE: On seeing photos of the Three Kings Parade elsewhere it looks as if maybe the part of the parade I saw, where in fact being chased by police as they attempted a breakaway from the main parade. It turns out the real Three Kings were in a horse-drawn carriage, travelling in style. Because of that, I can only assume these were there planning a gold robbery & that the local police noticed & were attempting to round the culprits up.

Wednesday, January 6th. Today started very early as I had a webinar to attend at 2 am. The lady holding the genealogy-related webinar was in Australia hence the early start. I got a couple of tips so it was worth it.

I went to bed about 3.30 am but was back up around 9 am & had a breakfast of avocado, scrambled egg & bacon. I would have had a pot of tea but my kettle had decided to die.

I went for a walk with my neighbour Russ at lunchtime. After going to a small supermarket that used to be open 365 days a year & discovering it closed we go for an Asiatico or two at La Olivera, where we bump into my friends George & Yvonne. After a chat we part ways, Russ & I go to the Alaska bar on the promenade where I have a Gin & Tonic for my diet. It soon gets cold & I head off home.

This evening I watch another webinar. I didn't learn anything new at this webinar but it was interesting & strange because the gentleman holding it sounded just like the actor Jimmy Stewart.

Thursday, January 7th. I have a delivery today so I cant stay in bed catching up on yesterdays missed sleep. For a change, I don't mind sitting in waiting for a delivery as it is pouring with rain outside & I don't want to go walking in the rain. Typically on a day I can't go out my delivery arrives before 10 am & I could now go out if the weather was better.