This week was spent entirely in Los Alcazares, mainly working on my website but I did manage to read a lot, sing at karaoke, watch a lot of football & rejoice when Arsenal went to the top of the League.

Monday, 15th August. I woke around 7 am this morning. I had forgotten what day it is today until I was woken early in the morning by the celebrations. Today is Saint Bangers & Bands day. It is the day that the local Spanish get up very early to set off very loud bangers for about two hours. They intersperse the noise & smoke of the bangers with the occasional marching band, that loudly parades through the back streets of Los Alcazares.

Whilst the bangers were still going off, followed by the barking of every frightened dog in Los Alcazares, I went down to the Mar Menor for my morning swim. It was quite strange as I did a backstroke out to the rocks, I could hear the cacophony of bangers, bands & barks & see the plumes of smoke that rose from around the area of the local church. It was then that I wondered how this event came into being. Whenever I have been in church I have been amazed by the quiet, every whisper being hushed by churchgoers, so today's bangers, drums, trombones, triangles, trumpets & mix of music don't seem to fit into my normal memory of a Saints celebration.

I bump into a jellyfish on my second lap out to the rocks. I am not stung but decide not to risk swimming further & call it a day. I go back to my apartment, have a shower, get a coffee & sit down at my computer & listen to the bands outside. As I write this I am treated to a brief version of some of Glenn Miller's tunes as a band goes past in the street. I decide to get on the sharky mobile & catch up with them to listen to them.

After listening to the band for a while, I head off to Los Narejos to see my friend Milke. I catch up with him outside Cafe Prensa & have a coffee & a tostada. After breakfast, I got the short way to Pizzeria La Sombra to meet my friend Martin. We have several beers to keep ourselves hydrated whilst we chat. At just after 2 pm Martin heads home & I head towards Rocos bar where I catch up with my mate Andy. We have a couple of beers & a chat before I head home.

Because of all the fresh air & extreme heat, I fall asleep as soon as I get home & don't wake until it's time to go to bed.

Tuesday, 16th August. I woke around 8 am today but don't go for a swim as I am expecting a parcel from Amazon. Whilst I am waiting my friend Pat pops round to take a quick look at a job I need some help with. He suggests an easy fix for my problematic water tap & can call tomorrow to fix it for me.

Around 11:30 am my parcel arrives which means I can now go out. As it is so hot again I decide to just sit on my balcony reading my kindle instead. When it gets too hot I go back inside & watch television with the air conditioning on.

Tonight I go to bed around 2 am after completing watching the ´The Outlaws´, it was very addictive & I thought it was very good. I just hope I wake early enough to let Pat in to repair my tap tomorrow.

Wednesday, 17th August. I woke around 7 am, I got a coffee & worked on my website till Pat came round at about 8:30 am. He quickly added a new fitting to the dodgy tap I had. It meant he didn't have to worry about breaking the old tap & means that I can have both my washing machine & garden hose connected at the same time. This was a problem before as the old fittings didn't quite fit correctly & with my poor eyesight, I had trouble switching the connections over. After he finishes we have a cup of tea & swap stories from the days when we both worked for the gas board.

After Pat left I went back to work on my website. The jobs I have been doing are very monotonous but have to be done to get me a faster-running website that will have all its pages indexed by Google. I work on the site for hours but a user may not notice any difference at all in what the website looks like because everything being done is in the code in the background. At least whilst the weather is so hot, it gives me a reason to stay inside out of the extreme heat. At about 1:30 pm I finish what I am doing & decide it's time for a break.

This afternoon I finish cleaning the kitchen up, & with Peggy's help, I vacuum the entire apartment. I say I vacuum the whole apartment that's not quite true. I watched television & got out of the way as Peggy vacuumed the apartment. She has been working well recently & as a special treat, I may let her mop the floors soon.

Thursday, 18th August. I woke around 8:30 today. I had a coffee, took a shower & then took my recyclable rubbish to the bins. After dropping off my rubbish I went to the  Mercadona supermarket to get my groceries. I also picked up some vitamins, ointments & various concoctions that may or may not help me to stop aching so much. Because I take so many tablets they do however make me rattle as I walk.

I am home just after 11 am but can't get in the apartment garage as the car lift is being serviced. I have to leave my disability scooter outside for a short time whilst the engineer puts the lift back together again. I believe he was fitting new lights on the roof of the lift. I had a coffee & went back downstairs half an hour later to put my scooter away.

Whilst going to put my scooter away, I checked my mailbox & discovered that a postcard that I sent to myself on the 11th May, whilst I was in Cordoba for the Patio Fair had finally arrived. I looked at the stamp on the card & saw that it was franked on the 18th of May in Madrid, eight days after I posted it in Cordoba. I have no idea why it went to Madrid to come back to Los Alcazares, it had a first-class stamp on it & took 101 days to travel the 500 km to get here. According to Google, it should take 90 hours to arrive if the postman was walking all the way. I know there have been weekends off & several holidays between when I posted it & when it arrived but this does seem to me as if the Spanish postal system isn't that good. 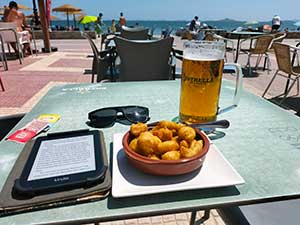 At lunchtime, I take my kindle down to the chiringuito next to my apartment. I order the battered Cuttlefish as I have never tried it before. I have a pint & sit down to read my kindle. The Cuttlefish is fantastic I will definitely have it again. Whilst there my friend Amanda joins me for a quick chat before she heads off home & I head back inside to stay out of the heat.

I get back inside switch the television on & watch the last two episodes of Arsenals, ´All or Nothing´ series. I have now watched all of them in the Arsenals version of the program, I thoroughly enjoyed them but I don't think I would bother watching the ones made for other football teams. I think you have to be a fan of the club involved to find them very interesting. I think the series showed how much Arsenal manager Mikel Arteta cares for the club. His desire to do well & to help his players comes across well in the program. I can't believe how many times he has lost his voice from shouting at the players during every game. I also can't believe how much he swears at the players when they arent following his instructions, he comes across as very quietly spoken in television interviews. I think he is a great manager & dealt with the problems he has faced so far, very well. We are in a new season now & the team are playing well, keep it up Mikel, up the Gunners.

For supper, I have a bacon cheeseburger. I don't stay up late & go to bed at 11 pm. Unfortunately, I can't get to sleep straight away, it seems like I am lying awake for ages before dropping off.

Friday, 19th August. I do not wake until 9 am this morning. It is probably because I couldn't get to sleep when I got to bed last night, oh well it's not like I have to be anywhere important. I get up, get a coffee & sit down at my computer to work on my website. After a couple of hours of work, I took a break & had some scrambled egg on toast for my breakfast.

This afternoon I was back to work on the website before going out to see my old mate Alan Bond at La Playa bar where he was doing karaoke. It was a great evening & I even got up, much to the horror of other customers & sang The Worzels hit, I got a brand new combine harvester. If you missed it, count yourself very very lucky.

Saturday, 20th August. It is now officially the weekend which means cheap electricity so when I get up, I strip my bed linen from the bed & put it in the washing machine.

The whole day today was spent watching different football matches or films. The match I was really interested in was the Bournemouth v Arsenal match though. Arsenal won 0-3 & played very well, the talking point of the game has to put the constant singing by the Arsenal fans throughout the game. They sang the name of every player & even some ex-players got mentioned. William Saliba's new fan song seemed to be sung whenever there was a lull in the game & he responded by scoring a fantastic goal. Not bad for a player in only his third game in the Premier League, he has had an eventful start to life in England. He was loaned out 3 times after Arsenal bought him, & then in his first game, he got the Man of The Match award. In his second game, despite playing really well, he, unfortunately, scored in his own goal. In his third game, he played really well & got an absolute screamer of a goal. Well played William Saliba, welcome to Arsenal.

I stayed up late to watch all the football on Match of The Day tonight, it's great to see Arsenal at the top of the table after last year's bottom-of-the-table start.

Sunday, 21st August. Today will again be a football day, after my coffee this morning I again watch the Match of The Day highlights. I wasn't dreaming yesterday, Arsenal really is top of the league.

In between watching today's football matches, I watch some of the Jesse Stone, made for TV movies. They really are good & easy to watch. As I get older I realise I prefer avoiding the crazy heat & screaming kids that arrive on the beach during the summer, so these films, the football, my air conditioning & my couch are my favourite things at the weekends these days.

The football threw up some unexpected results again. Manchester City managed a  3-3 draw with Newcastle United after being 3-1 behind. West Ham United lost again, this time BHA beat them 2-0, & Leeds United hammered Chelsea 3-0. This means Arsenal are still top of the league.