I saw this trip advertised on Facebook & as I have decided to try doing a lot more day trips I booked this one up. It included the coach trip, breakfast, a tour of the Bodega, a four-course meal with wine, & then a visit to the village of Alcala del Jucar.

This trip was booked through Facebook with Viajes Real Spain. It was the first trip I have booked through them. My neighbour John was good enough to drop me at the Arches in Los Narejos at 7 am to catch the coach. Just after I arrived two of my other neighbours, Rick & Jill arrived, followed shortly after by about another 6 people. We were soon all on the coach & on our way.

Because I had got a bad cramp on my last coach trip, why are Spanish coaches so cramped, the leg room is terrible, I went straight to the centre seat at the back of the coach. Sitting there meant I could at least stretch my legs out in front of me. Begona, the lady who had organised the trip, asked if I was okay & I explained that my legs weren't great & that is why I had sat there, from that point on throughout the day, she kindly checked how I was, thank you for that Begona it was above & beyond.

We stopped at several places to make pick-ups but after the last pick-up in Quesada we travelled quite quickly & by 10:30 we had arrived at Albacete where we were to tour the Bodega. The Florentino Pérez Bodega was beautiful to look at from the outside with fountains creating soothing sounds in the courtyard & the surrounding vineyards creating a very tranquil setting. We were taken inside to a large restaurant where we all sat down at tables & were given a very nice breakfast, a french stick containing prosciutto ham & tomato. Each one was a foot long & it filled me up nicely as I hadn't had time for breakfast before I left. With breakfast, we were given a glass or two of red wine to wash breakfast down before finishing it with a very nice coffee.

After breakfast, we were given a guided tour of the Bodega. We were told how this vineyard grows its vines without using pesticides & how it uses water to regulate the sugar content of the grapes & how it then produces its beautiful wines. After hearing about the vines we were shown around the vats where the wine is produced before being shown to the bottling area & the cellar where we were told about the wine barrels & the wine ageing process. 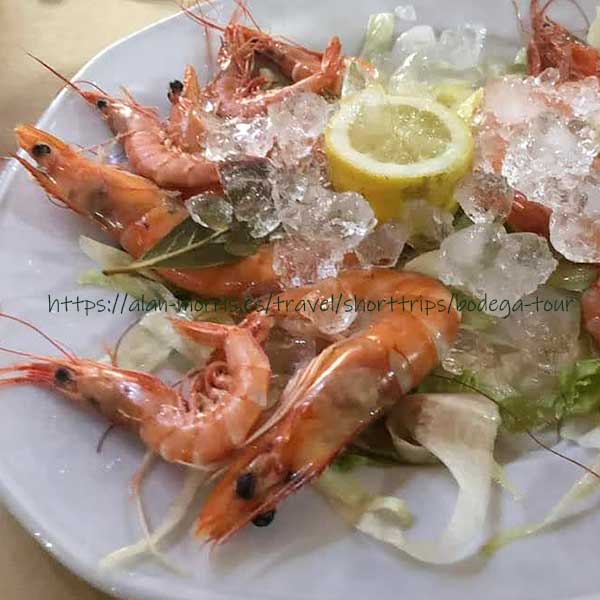 After the tour, we were taken back to the restaurant for lunch. The lunch was really good & I was lucky enough to be sitting with people who were not big fans of seafood & I was able to be a real pig during the first course. The first course included shelled muscles in a beautiful sauce, served with fresh, warm bread, for dipping in the sauce. This was served with plates of large whole prawns served on a bed of ice to keep them cool. The prawns were fantastic, I can't remember the last time I ate such beautiful prawns. With this course we were served a white wine which I thought was very nice, I even had a second glass.

The next course was something I was expecting to be very plain but it was anything but & I loved it. It is a local dish from the province of La Mancha, consisting of mashed potatoes mixed with garlic & raisins. After this came a plate of cold meats & cheese which was very nice, especially the cheese. This was served with a glass of very pleasant Rosé wine. Finally came a pork & rice dish which is another local dish, it was very nice & was served with a beautiful red wine. I may have had more than one glass of red wine.

I am normally a beer drinker & not a great lover of wine generally, but I enjoyed all of the different wines I was served at the Florentino Pérez Bodega & I did purchase a box of some of their wines consisting of three bottles of white wine & three bottles of red wine. If you want to try some you can order some from their website & get them delivered to you. I would like to thank the people that carried my wine to the coach for me to save me from struggling down the steps with it. 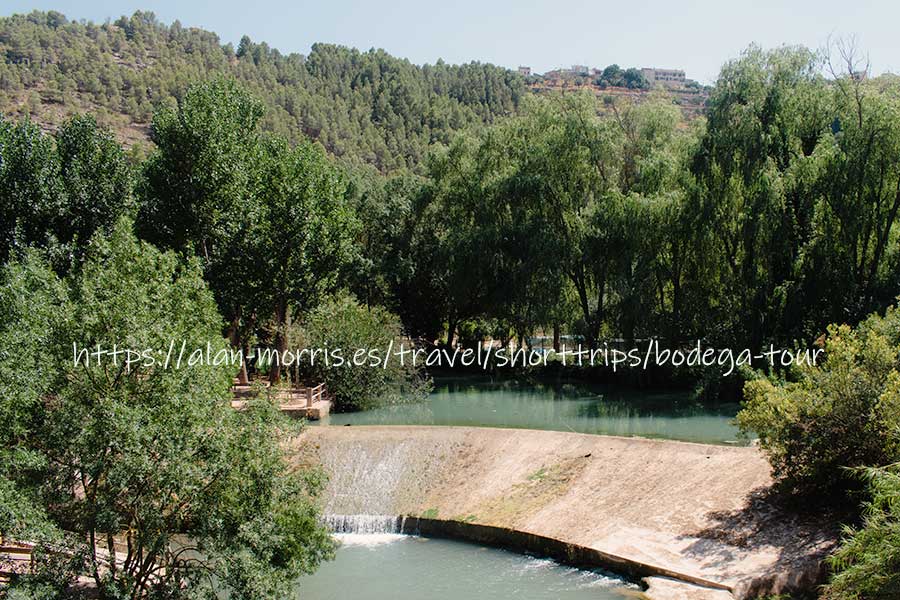 After our meal at the Bodega, we all got back on the coach & set off for Alcala del Jucar, a small village in Castilla la Mancha. The journey there through stunning countryside & along small winding roads through spectacular ravines didn't take long & I really enjoyed the views. We stopped in the village, close to the man-made beach area on the Júcar River & below the Castle & Church perched on the side of the steep mountains. We only had an hour to look around but after listening to a brief history of the town given by a beautiful local guide, I walked across the bridge over the river & walked a short distance up the mountain. I had to stop twice going up the first two sections as it was so steep. As I walked past the church & began walking up further, a Dutch couple that was on the coach I was on, were walking back down. The Dutch lady told me there wasn't much more to see going the way I was going & I told her I loved her for saving me the long walk up the next stretch.

I took my time walking back down the road, crossed over the small bridge & joined my neighbours, Rick & Jill, at a small bar next to the beach on the riverside. I got myself a small beer, got my breath back from walking in the extreme heat & then took my sandals off & went for a paddle in the river. The water was cool rather than cold & was very refreshing. Three Norwegian girls that were also on the trip, soon sent my temperature soaring back up as they paddled in the river & stood on the beach where I was paddling. I left them to it & got myself a large bottle of ice-cold water to cool me down on the way home. I would like to thank the three Norwegian girls for making a lovely day even more beautiful, especially the one wearing the figure-hugging green dress.

At 5 pm we all got back on the coach & began our long journey home. We made one comfort stop on the way home & then dropped people off at the places they had boarded the coach. When we arrived back at Los Narejos I got off the coach, collected my bottles of wine & was very pleased when my neighbours Rick & Jill had arranged for a friend of theirs, to pick us all up & take us back to our apartments in Los Alcazares. Thank you very much for getting me home I was beginning to fade in the heat by that time.

All in all, this was a brilliant day out, I had a great time, the food was fantastic, the company was great & the trip itself was one I would highly recommend to anyone. Thank you Begona for organising the trip, I really enjoyed it & hope to go on many more of your trips.

Photos from my day out.